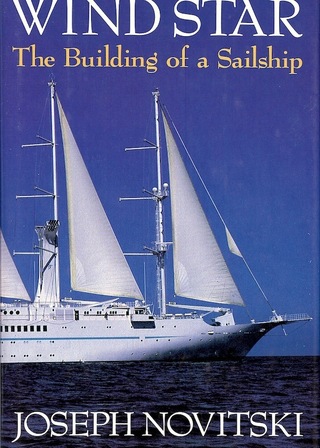 Wind Star – The building of a sailship

"She slid at first in the same kind of sudden huge silence that fills the instant before an avalanche or the seconds before an earthquake. That is a windless sound, as if the mountains were drawing in breath before letting it all out in a huge and rumbling sigh; one of those sounds that are not noise, that are felt more than heard. At the launch, the instant ended when the cradles hissed past and the ship's stern took the water, shoving back the flood tide. Two ship lengths of four-inch anchor chain, laid out below the cradles to slow her rush, rattled down the ways after her and the ship genuflected to the land , pivoting on the bow cradle as seawater bore her up from the stern."

"The author follows the building of Wind Star every step of the way, describing the technicalities in terms laymen can understand while writing a narrative as compelling as an adventure novel."

–The Virginian-Pilot and the Ledger-Star, signed review , February 2, 1988
"Author Joseph Novitski, who went to sea when he was 12 and later on to be a world-class yacht-racing titleholder, provides the detailed narrative of a dream come true."
–Chicago Tribune, January 31, 1988