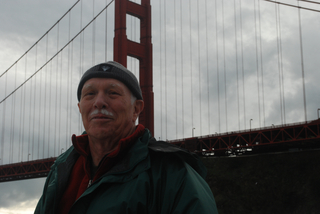 Joe Novitski was born on the far side of the Pacific Ocean and raised on the near side of that ocean, north and south of the Equator. He went to sea first as an apprentice commercial fisherman and later sailed for some years on San Francisco Bay. He was educated on the U.S. east coast where he learned the Atlantic Ocean.

Oceans were central to his life as a line officer in the U.S. Naval Reserve, and were always nearby during journalistic assignments to Rio de Janeiro, Buenos Aires and Santiago while Novitski was on the staff of The New York Times. That newspaper was kind enough to grant Novitski leaves of absence to compete internationally as a member of the Brazilian National Ocean Racing Team for three years.

In 1977 Novitski returned to Northern California to grow wine grapes as a farming owner-operator in the Dry Creek Valley of Sonoma County for six years. With his friend and co-author, photographer Nick Pavloff, Novitski wrote through the growing season of 1980 for his first book, A Vineyard Year (Chronicle Books, San Francisco, 1983).

The opportunity for Novitski's second book, Windstar – The building of a sailship (Macmillan, New York, 1988), arose alongside the Gulf Stream in southern Florida where Novitski worked for years in family agricultural partnerships and in his own logistical consulting business.

Novitski has returned to live on the shore of his home water, San Francisco Bay, where he is at work on a novel and a third work of nonfiction.